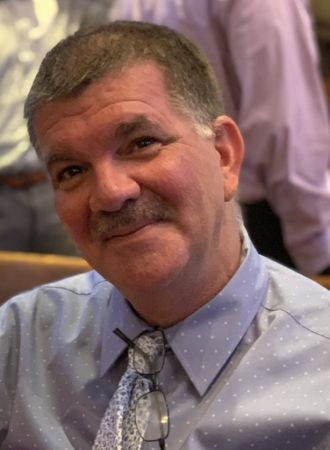 Location:
Saints Peter and Paul
Date:
Monday, July 05, 2021
Time:
6:00 pm
Posted by:
Carol A Elkins
Posted on:
July 7, 2021
Our deepest sympathy to the entire family. Terry was a great guy and truly will be missed.

You are in our thoughts and prayers.

I was truly sad when I learned of Terry’s passing. Far too soon! There is a saying that only the good die young. God must have had that in mind when He took Terry. He was a treasured associate when he was with Garfield Electric. He was admired and respected by all at Garfield. He was a five star leader and a creative thinker in the trade. I recall a number of times he came up with innovative ideas that saved time and money for the company. But, mostly, he was such a great person. I know you all must feel a great loss, but I pray you all carry on in his memory and do your best to be like him.
Posted by:
Jeffrey Steelman
Posted on:
July 4, 2021
Cyndi, my heartfelt condolences to you and your family.
May your memories lift you up through this difficult time.

Jeff Steelman
Posted by:
Carol Elkins
Posted on:
July 3, 2021
You are in our thoughts and prayers. Our deepest sympathy on the loss of Terry. He always had a wonderful smile and a welcoming manner. Heaven has gained another beautiful angel...

All of our love and prayers.

Carol and Rachel Elkins and Frank Flick.
Posted by:
Michael Means
Posted on:
July 3, 2021
Prayers to the Family and many Friends ..

Posted by:
Steve Daffron
Posted on:
July 2, 2021
Terry and I worked together for 20 years at Garfield Electric. We liked to talk about Andy Griffith Show, work and many other things. He was a very respected man, as a boss and friend. He was a true to life man of integrity.
I’m so sorry for your loss. He made a giant impact in my life and I will miss him until we meet again!
Report This Comment
Let us know why you would like to report this Comment.
Your report will be kept anonymous

If Terry had a motto it would have been “Faith, Family, Farm”. His parents instilled a strong faith to him and his siblings. He carried this throughout his life and his dedication to his church and Parish Community of Sts. Peter and Paul where he was a life time member, along with the Catholic Order of Foresters.

His dad Leo instilled his love of music and playing guitar from a young age. Loving Outdoor, Farming, raising tobacco, Playing Holy Name baseball league on Sundays even after being out late the night before at the SPP picnic or playing a band job with Countryfied at the Texas Two Step. Terry was still very close to his childhood friends from S.P.P. and loved exchanging stories from their younger days and their good times which brought on many hours of laughter even though those same stories had been heard hundreds of times.

He married his wife Cyndi, and they had just celebrated their 36th wedding anniversary on June 1st. They enjoyed taking Sunday rides in his ‘72 Chevelle. During his life he instilled an honest strong work ethic in his children always telling them “Make me Proud”. He had a great business sense especially running his cattle farm. Terry took pride and loved his job as an electrician for over 40 years with a wealth of knowledge for the trade. A great resource and always took time to teach the younger Men/Women learning the trade.

You could find him sitting on the barn porch rocking away admiring the Farm, his family bustling around him, listening to good ole country music or the Reds game, always a diehard fan no matter their record. He loved watching “The Andy Griffith Show” but ONLY the Black and white episodes the ones in color just weren’t as good.

He is survived by his loving wife Cyndi (Martin) Bezold. Their children; Rebecca (Jonathan) Neltner, Nicholas Bezold, Jenna (Chad) Bezold, Marissa (Matthew) Kramer and Nathan Bezold. Siblings; Sandy (Charlie) Boesch, Susan Flick and Brian (Theresa) Bezold. Sister-in-law Kim Bezold. His grandchildren Henry and Millie and the two new expected grandchildren will always know “who loves ya?……POPS.” His Father-in-Law Clarence Martin. Along with many nieces, nephews and friends He was preceded in death by his parents Leo and Tillie Bezold, his brother Gary Bezold and Mother In Law Millie Martin.

Please join the family on Monday July 5th at 4 PM for the Mass of Christian Burial at Sts. Peter and Paul Church. Following the Mass there will be a Celebration of Life at Terry and Cyndi’s home and all are welcome. Cooper Funeral Home is serving the family. In Lieu of Flowers, memorials are suggested to Sts. Peter and Paul School.