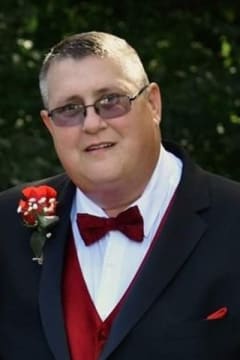 Todd Andrew Ray, 49, of Grants Lick, KY passed away at St. Elizabeth Fort Thomas on July 14, 2020. He was the son of Kendall and Margaret (Willhite) Ray. He was a member of Mentor Baptist Church. He was a Kentucky Colonel. He enjoyed the outdoors and spending time with his family. He was preceded in death by his parents, Peggy Ray, Kendell Ray and his dog, Rubble Ray. He is survived by his wife; Lynn Ray. Daughters; Amber (Shaun) Bailey, Katelyn (Justin) Morency and Allison (Johnny) Tillett. Brother; Randy (Lori) Ray. Sister; Barb (Terry Shaw) Penick. Along with 11 Grandchildren, Brayden, Addison, Rylee, Carter, Kaylee, Kendall, Kameron, Micheal, Abigail, Grant and another one soon to arrive. 13 nieces and nephews and 15 Great nieces and nephews. He will also be missed by his dog, Max. Visitation will be held at Cooper Funeral Home on Saturday, July 18, 2020 from 11am-2pm. Service will be held at 2pm. Burial will take place immediately after at Grandview Cemetery. Cooper Funeral Home is serving the family.

Please share a condolence, photo or memory of Todd. We welcome all condolences that are positive and uplifting that will help family and friends heal.