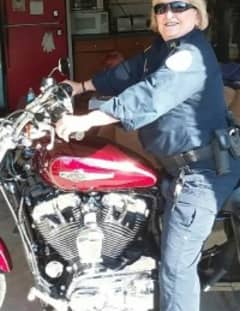 Sharon attended Newport High School. She was a long time resident of Dayton, Kentucky before moving to Woodlawn, Kentucky where she served on city council. Prior to retiring due to her illness, Sharon was employed as a deputy jailer at the Campbell County Detention Center for over 13 years. During her time at CCDC she was promoted to the rank of Sergeant. As her work family has repeatedly stated, she was admired and respected by all, even the inmates. It was well known that despite her tiny size, she was as tough and fierce as they come. In her free time, Sharon enjoyed riding her motorcycle, working in her yard, and relaxing by the pool on beautiful summer days.

For nearly three years, Sharon bravely fought liver cancer. She tried multiple treatments, even experimental ones through the University of Cincinnati Hospital. Ultimately when a cure was unlikely, she was determined to extend life as long as possible. She battled so bravely to keep living every day to its fullest never letting the progressing disease or treatment side effects keep her down. Even when she felt horrible, she would not let you know it. She wanted everyone to remember her with a smile rather than with tears in their eyes. As such she elected not to have any funeral services. The family is respecting those wishes. In lieu if any flowers, please make donations to the Susan G. Komen Breast Cancer Foundation of Cincinnati located at 6120 South Gilmore Rd, Fairfield, OH 45014 in her memory.

Please share a condolence, photo or memory of Sharon. We welcome all condolences that are positive and uplifting that will help family and friends heal.