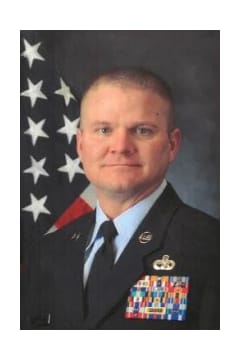 Larry “Jason” Little, 48 of Benton, LA, passed away on 25 September 2018 at home after a courageous three year battle with colon cancer.

Jason was born in Fort Thomas, KY to Kathy D. Yelton and Larry C. Little, Sr. on 25 August 1970. He entered the United States Air Force on 2 April 1992 and served for 23 and a half proud years, retiring in 2015. He deployed numerous times and served during OPERATION IRAQI FREEDOM and OPERATION ENDURING FREEDOM. He married his wife Deborah (Debbi) Little on 7 July 2001 and together they traveled the world with the Air Force.
Jason is survived by his wife Debbi. His daughter Miranda E. Little and grandson Kline C. Russell, his father Larry C. Little Sr and stepmom Darlene, his mother Kathy D. Yelton, brother J. Michael Cavanaugh, Jr., wife Cari and nephews Evan and Tate, brother Richie Little, sister Larissa Little and nephew and niece Josiah and Marleigh, and numerous aunts, uncles and cousins.
Jason was a diehard Cincinnati Reds, Cincinnati Bengals and Tennessee Volunteers fan. He rarely missed a game. In lieu of flowers, memorial donations may be made to the Cincinnati Reds Kids Club who has partnered with the Cincinnati Children’s Hospital and all donated memberships are given to the children seen at the hospital. The cost of a membership is $10. To donate, please call 513-765-7452 or email FanClubs@reds.com and let them know that the donated membership is in Larry Jason Little’s memory.
Jason was a man of few words, but if he had something to say or was passionate about something, he would speak his mind. He always made sure that Debbi and his family were well taken care of. He will be remembered for his fierce devotion to always doing the right thing. He lived the Air Force Core values: Integrity First, Service before self and Excellence in all we do.

Please share a condolence, photo or memory of Larry. We welcome all condolences that are positive and uplifting that will help family and friends heal.