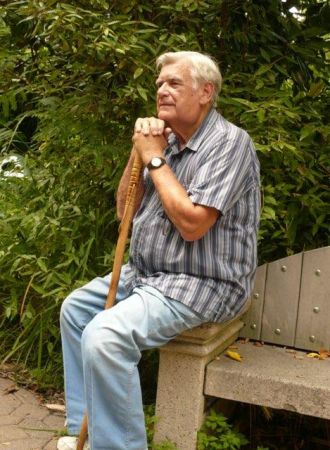 F. Raymond Stilwell, 89, of California KY passed away on September 13th, 2022. He was born in Harrisburg, Pennsylvania to Frank Richard and Ninita (Roof) Stilwell. He grew up in Des Plaines, IL. He went to Eastman School of Music in Rochester, New York from 1950-1954 where he received a Bachelor’s in Performance of the Viola. Raymond was a member of the Marine Band Orchestra from 1954-1965 where he played for many Presidents including Dwight D. Eisenhower, Lyndon Johnson and John F. Kennedy. He taught at the Interlochen Arts Academy from 1965-1969. He received his Master’s degree from Indiana University in Bloomington, IN from 1969-1971. Raymond won a position with the Cincinnati Symphony Orchestra and performed from 1971-2008; with whom he made many recordings and traveled throughout the United States and the world.

Raymond was a loving husband, devoted father and deeply committed to living and sharing his Christian faith. He was an avid fisherman, a skilled chess player and a baseball enthusiast.

Raymond was preceded in death by his parents, wife Jo Ann Stilwell, daughter Jane Stilwell and brother, Lawrence Stilwell. He is survived by his daughter, Julia (Frank) Taylor and son, Jonathan Stilwell. Along with 2 Grandchildren and 6 Great Grandchildren. Memorial Visitation will be held on Thursday, September 22nd, 2022 at Cooper Funeral Home from 4pm-6pm. Service will begin at 6pm. Burial will be at the convenience of the family.
Posted by:
Julia Taylor
Posted on:
September 23, 2022
Thank you so much for your support! The service was beautiful!
Report This Comment
Let us know why you would like to report this Comment.
Your report will be kept anonymous