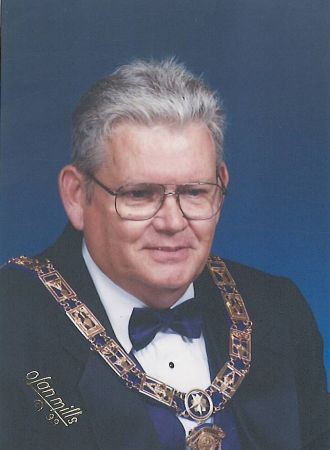 Donald Edward Webster, 86, Brooksville, KY formerly of Hudson, FL passed away on July 18th, 2022. He was the son of James and Thelma (nee Dalton) Webster. Donald was born and raised in Elsmere, KY. Donald had retired from Duke Energy, formerly known as Cincinnati Gas and Electric. He proudly served in the United States Army. He was a member of the Church of Christ. Donald was a member of Good Faith Lodge #95 where he served as a Past Master and Secretary, Jeffries Council #33 where he served as Illustrious Master, Temple Chapter #172 where he served as High Priest, Newport Commandery #13 where he served as Recorder, Commander, Grand Council of Kentucky Royal and Select Masters where he served as Grand Sixth Arch Deputy and received the President Honorary Degree of Ish-Sodi in 1995 and became a 33° Mason. He was a Past Master for Henry Barnes Lodge #607. Donald had served as President for the 33° Club and the Northern Kentucky York Rite Association. He was a lifelong member of El Hasa Shrine Temple. He was preceded in death by his parents and his wife, Marlene Webster, grandson, Derek Mains, brother James Howard and sisters, Wanda Conley, Virginia Webster and Wyetta Webster. Donald is survived by his daughter, Sherry (Don) Vail. Sons; Walter (Kim), Donald (Ruby), Larry (Bobbie) and Howard (April) Webster. Sister; Darlena Napier. Along with 17 Grandchildren and 35 Great Grandchildren. Visitation will be held at Cooper Funeral Home on Tuesday, July 26th, 2022 from 5pm-8pm. Service will be held on Wednesday, July 27th, 2022 at the funeral home at 11am. Burial will take place in Floral Hills Cemetery. Cooper Funeral Home is serving the family.