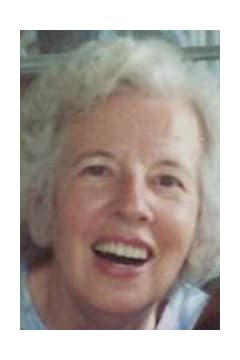 Betty Jane Sickmeier, age 97, of Alexandria, KY passed away peacefully on Monday, June 17, 2019 at Carmel Manor in Fort Thomas. She was born the daughter of the late Louis C. and Augusta Sickmeier on July 31, 1921. In addition to her parents, she was preceded in death by her brother, Louis G. Sickmeier, and sister, Grace Hutchinson. She is survived and will be missed by her brother, Roger Sickmeier; nieces; Susan Kresge, Sally Schoellman and Betty Lou McDaniel; and nephews; Ron Sickmeier and Dr. Bruce Hutchinson, as well as many great nephews, nieces, and dear friends.
Born and raised in Campbell County, Kentucky, Betty lived a long and full life. Betty loved her home in Alexandria, KY, hosting many friend and family gatherings. She was a longtime member of Alexandria United Methodist Church, Alexandria Women’s Club, Campbell County Homemakers, and after retirement was an active member of the Happy 100. She enjoyed visiting with friends daily at Spare Time Grill.
She started her career selling shoes in Newport while taking night classes, and became an executive secretary to managers of Greyhound Bus Company, Bavarian Brewing, and ULH&P (CG, & E) retiring there after 28 years. Betty loved animals and owned many beloved pets over the years. She was an experienced horse rider and trainer, owned Arabian horses, and showed horses at the Alexandria Fair where she won numerous ribbons. She also served as assistant secretary on the Alexandria Fair Board, and was a member of KARABS (Kentucky Arabian Breeders and Riders Society). Betty was active in Republican politics, a Kentucky Colonel, and received recognition from both Kentucky state officials and President Ronald Reagan. Private Celebration of Life to be held at the convenience of Betty’s family. Memorials can be sent to Alexandria United Methodist Church, 8286 West Main St., Alexandria, KY 41001 or Protect 4 Paws Animal Shelter, 105 Three Mile Road #A, Wilder, KY 41076. Cooper Funeral Home is serving the family.