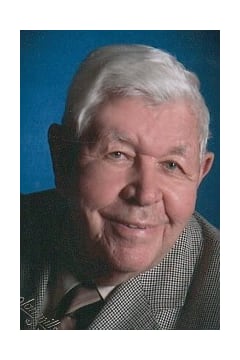 Arthur Joseph Woeste, 92, of California, KY passed away on March 31, 2020 peacefully at his home. He was born on August 25, 1927 in Ludlow, KY. He was the son of Joseph and Henrietta (Surnbrock) Woeste who preceded him in death. Art joined the Navy when he was 17 years old and stationed in Camp Wallace in Galveston, TX. He was granted special permission to come home and graduate his senior year at CCHS. Art was honorably discharged as a 3rd class specialist in 1946. A letter from his captain stated “your son had an important task of processing nearly 70,000 naval personnel. You should be proud of your son.” In 1946, he married his sweetheart, Agnes “Peggy” Meyer and they opened the Stone House Camp Springs grocery store for five years. When their business expanded, they moved their business to Art’s Food Market, which included a meat locker plant and dry cleaners on Main St. in Alexandria for 25 years. During those 25 years, Art became an EMT for the Alexandria Fire Department and worked his way up to Asst. Chief for 17 years. When IGA moved in the area, Art sold the store and went to KY Enterprise in 1970. He was promoted to Sr. Vice President in 1986 and retired from there in 1992. During his time there, he helped many young families get their first home or start their own business. Art and his wife survived the Beverly Hills Fire in 1977. He was actively involved in Sts. Peter and Paul Church on Twelve Mile and served under two Bishops; Bishop Hughes and Bishop Muench. He served as a Eucharistic Minister for St. Elizabeth Hospital for 8 years. He was a member of Knights of Columbus for over 75 years, St. Vincent de Paul Society, Catholic Order of Foresters, Lifetime member of the Campbell County Library Board of Trustees and helped with the funding to build the Campbell County Library in Cold Spring, KY. He was instrumental in establishing the fund to build and maintain the Social Center and adding an expansion at Sts. Peter and Paul school. He served on the Alexandria Fair Board for many years and became an Honorary Member. Art was a loving husband and father during these years of his many accomplishments. He and Peggy enjoyed their retirement part time in Florida and spending time with their children and grandchildren on their farm.
In addition to his parents, he was preceded in death by his wife, Peggy in 2004 and his son; Garry Woeste in 2019.
He is survived by his son; Robert (Kathy) Woeste and daughter; Marylu (Don) Steffen. Daughter in law; Sue Woeste. Sisters; Shirley (John) Wetzel and brothers; Don (late Rosie) Woeste, Jim (the late Eileen) Woeste, Roy (the late Nancy) Woeste. Grandchildren; Lori (Dave) Taylor, Stacey (Craig See) Woeste, Emma (Kenny) Walker, Matt (Anna) Woeste, Nick (Brandi Todd) Woeste and Lauren Steffen. Great Grandchildren; Raelynn Steffen, Adeline and Evelyn Walker, Millie and Gwen Woeste and Wyatt Taylor.
Visitation and Graveside services are going to be private and the convenience of the family. Burial will take place at St. Mary’s Cemetery in Alexandria, KY.
In lieu of flowers, donations can be made to Sts. Peter and Paul Church, 2162 California Crossroads, California, KY 41007 or Our Lady’s Farm, 5820 Highway 159N, Falmouth, KY 41040. Masses can be said at Sts. Peter and Paul Church or St. Mary’s Alexandria. A Mass will be held at a later date once the restrictions are lifted. Cooper Funeral Home is serving the family.